The Truth About Santa Claus 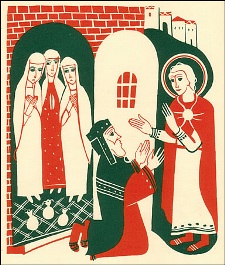 What comes to mind when you think of Santa Claus? Probably jolly ol' St. Nick in his red suit, a snowy North Pole, a sleigh pulled by reindeer, gifts for Christmas or similar images. But there's more to "St. Nick" than just the nickname.

History tells us that an actual Christian saint by the name of Nicholas ministered in the fourth century. Mythologized and secularized though he has been, Nicholas' deeds of compassion were authentic.

Nicholas was born in the port city of Patara in Asia Minor around A.D. 280. When he was still young he came to faith in Christ, due primarily to an uncle who was a priest. When he was about 10 years old, a plague swept Patara killing many, including Nicholas' parents. His uncle placed him in a monastery, an act of kindness in those times.

At 19 Nicholas became a priest, and at 20 he became the bishop of Myra Lysia, now Demre, a city near Patara. He became known as a compassionate bishop who had a great love for the poor, disenfranchised and morally bankrupt.

Nicholas' acts of mercy soon became the stuff of legends. The most famous story regards his wealthy friend, a shipping merchant, who was reduced to poverty overnight. This man had three daughters of marrying age. In those days a young woman could not marry unless her father provided a dowry for her; without one, she was doomed to a lifetime of loneliness and poverty.

Nicholas had the resources to help his friend but knew the offer of such assistance would humiliate the man—who would never be able to repay the loan. The good bishop was jolted out of his dilemma when he learned the eldest daughter would sell herself as a prostitute to pay the dowries of her younger sisters.

Still, his plan would have to be done in secret so his friend would not be dishonored. On three consecutive nights Nicholas crept into town and dropped bags of gold where the family would easily find them. On the last night, he dropped a bag of gold down the chimney, where it landed in a stocking hung up to dry. After the third night, the daughters had their dowries, the merchant's family was rescued from poverty and the eldest daughter was saved from prostitution.

Nicholas was also a defender of the faith. He lived three centuries after Jesus Christ ascended into heaven, and church doctrine about the person of Christ was not yet fully developed.

A priest named Arius was teaching a heresy called Arianism, which stated that Christ was more than a man but less than God. To settle this, then-Emperor Constantine called a council of bishops at Nicaea. The result was the condemnation of Arius and his teachings and the development of the Nicene Creed, a Christian statement of faith.

It is believed that Nicholas was present at the council and became so enraged at Arius' denials of Jesus' divinity that he punched his jaw and sent him flying from the council hall.

Nicholas, who loved children, started a ministry akin to the original "Santa's workshop." He hired a cook and carpenter—the latter to supply wooden toys for poor children. He is credited with the original recipe for cinnamon rolls and gingerbread, invented as a comfort food for children.

Saint Nicholas is believed to have died in either 342 or 352, or some time in between, on December 6.

Should children be taught to believe in Santa?